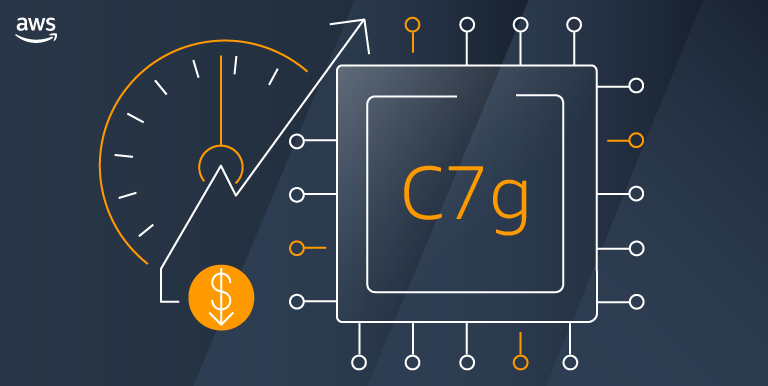 I am excited to announce that Amazon Elastic Compute Cloud (Amazon EC2) C7g instances powered by the latest AWS Graviton3 processors that have been available in preview since re:Invent last year are now available for all.

As you bring more diverse workloads to the cloud, and as your compute, storage, and networking demands increase at a rapid pace, you are asking us to push the price performance boundary even further so that you can accelerate your migration to the cloud and optimize your costs. Additionally, you are looking for more energy-efficient compute options to help you reduce your carbon footprint and achieve your sustainability goals. We do this by working back from your requests, and innovating at a rapid pace across all levels of the AWS infrastructure. Our Graviton chips offer better performance at lower cost along with enhanced capabilities. For example, AWS Graviton3 processors offer you enhanced security with always-on memory encryption, dedicated caches for every vCPU, and support for pointer authentication.

Let’s illustrate this with numbers. When we launched Graviton2-based instances, they provided up to 40 percent better price/performance for a wide variety of workloads over comparable fifth-generation x86-based instances. We now have 12 instance families (M6g, M6gd, C6g, C6gd, C6gn, R6g, R6gd, T4g, X2gd, Im4gn, Is4gen, and G5g) that are powered by AWS Graviton2 processors that provide significant price performance benefits for a wide range of workloads. In 2021, we saw tens of thousands of AWS customers take advantage of this innovation by using Graviton2-based EC2 instances.

Our next generation, Graviton3 processors, deliver up to 25 percent higher performance, up to 2x higher floating-point performance, and 50 percent faster memory access based on leading-edge DDR5 memory technology compared with Graviton2 processors.

Graviton3 also uses up to 60 percent less energy for the same performance as comparable EC2 instances, which helps you reduce your carbon footprint.

Snap Inc, known for its popular social media services such as Snapchat and Bitmoji, adopted AWS Graviton2-based instances to optimize their price performance on Amazon EC2. Aaron Sheldon, software engineer at Snap, told us: “We trialed the new AWS Graviton3-based Amazon EC2 C7g instances and found that they provide significant performance improvements on real workloads compared to previous generation C6g instances. We are excited to migrate our Graviton2-based workloads to Graviton3, including messaging, storage, and friend graph workloads.”

The C7g instances are available in eight sizes with 1, 2, 4, 8, 16, 32, 48, and 64 vCPUs. C7g instances support configurations up to 128 GiB of memory, 30 Gbps of network performance, and 20 Gbps of Amazon Elastic Block Store (EBS) performance. These instances are powered by the AWS Nitro System, a combination of dedicated hardware and a lightweight hypervisor.

The following table summarizes the key characteristics of each instance type in this family.

C7g instances are initially available in US East (N. Virginia) and US West (Oregon) AWS Regions; other Regions will be added shortly after launch.

As usual, you can purchase C7g capacity on demand, as Reserved Instances, or as Spot instances, and use your Saving Plans. The pricing details are available on the EC2 pricing page.

I have the chance to talk with AWS customers on a daily basis, and many of my discussions are around price performance and the sustainability of their workloads. With more than 500 instance types to choose from, one question I often receive is: what are the workloads that would benefit from C7g?

The next question I receive is: given that Graviton instances are based on Arm architecture, how difficult is it to migrate from x86?

Graviton3 instances are supported by a broad choice of operating systems, independent software vendors, container services, agents, and developer tools, enabling you to migrate your workloads with minimal effort.

But you don’t always need to migrate your applications. Several managed services are based on Graviton already, such as Amazon ElastiCache, Amazon EKS, Amazon ECS, Amazon Relational Database Service (RDS), Amazon EMR, Amazon Aurora, and Amazon OpenSearch Service, and your application can benefit from Graviton with minimal efforts. A French customer told me recently they migrated a significant portion of their Amazon EMR clusters to Graviton by doing just one line change in their Terraform scripts; all the rest worked as-is.

For those of you building with serverless, we have also released Graviton support for AWS Fargate and AWS Lambda, extending the price, efficiency, and performance benefits of Graviton to serverless workloads. Lambda functions using Graviton2 can see up to 34 percent better price/performance.

Reducing the carbon footprint of your organization is also of paramount importance. Reducing the carbon footprint of cloud-based workloads is a shared responsibility between you and us. We do our part by innovating at all levels: from the materials used to build our facilities, the usage of water for cooling, and the production of renewable energy, down to inventing new silicons that are more energy efficient. To help you meet your own sustainability goals, we added a sustainability pillar to the AWS Well-Architected framework, and we released the Customer Carbon Footprint tool. Graviton3 fits into that context. It uses up to 60 percent less energy for the same performance as comparable EC2 instances.

We do our part in this shared responsibility model, and now, it is your turn. You can use our innovations and tools to help you optimize your workloads and only use the resources you need. Take the occasion to write clever code that uses fewer CPU cycles, less storage, or less network bandwidth. And be sure to select energy-efficient options, such as Graviton3-based instance types or managed services, when deploying your code.

To help you to get started migrating your applications to Graviton instance types today, we curated this list of technical resources. Have a look at it. To learn more about Graviton-based instances, visit the Graviton page or the C7g page and check out this video:

If you’d like to get started with Graviton-based instances for free, we also just reintroduced the free trial on T4g.small instances for up to 750 hours/month until the end of this year (December 31, 2022).

Where the Metaverse Can Take FinTech